Originally conceived to comply with the COVID Rules that have impacted all our riding throughout 2020 and 2021, this event became popular with members in 2021 and is now planned to be a regular national event. Sections have been asked to nominate locations in their area worthy of visiting on a motorcycle – the Way Points, selected for interest, the view or just a good place to get a bacon sandwich.

The National Way Point Rally will run from Sunday May 1st until 30th September.

Members are invited to visit the Way Point as a destination for informal (or formal) rides in groups. Ideally you will be able to undertake a number of runs throughout the summer, to various Way Points. Running over 4 months should allow plenty of opportunities of good weather riding and some great photo opportunities.

The list of Way Points, the rules for claiming them and photography competition are in the downloadable pdf, or by e-mailing nwp@vmcc.ne

You can claim your Waypoint and upload a picture using the Online Submission Form. Alternatively send and email to nwp@vmcc.net and include the following information:

Many people have asked if the Founders Relay Rally will be run in 2022. Following feed-back from the Area Reps it was understood that this event had lost some appeal and sections were reluctant to set up and man check-points for just a small number of participants (sometimes none). It is proposed, therefore, that instead of the Founder Day Rally riders should make every effort to use the May 1st date to ride out to a Way Point. why not arrange to meet other riders there from neighbouring sections and chat over a cuppa and a bacon sandwich. 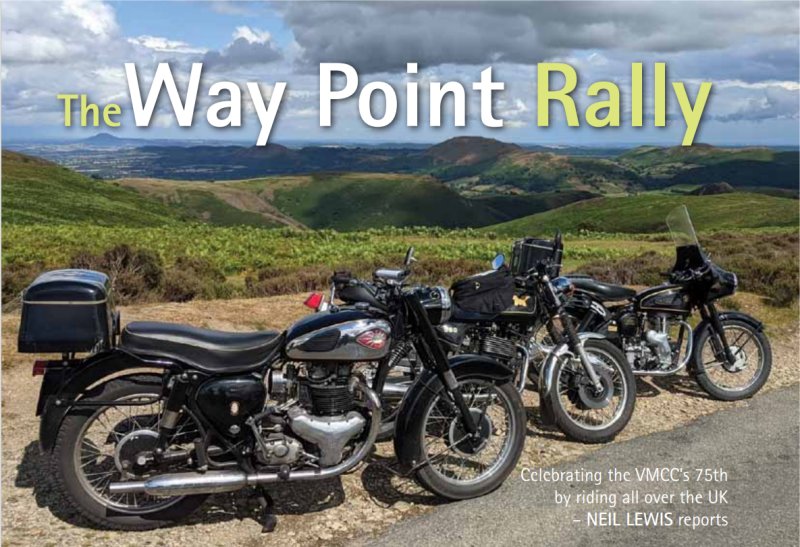 During the summer many of us enjoyed the National Way Point Rally as well as our usual section runs. The idea was simple, to visit any of 228 way points across the country – every section nominated some in their area. At every one visited, participants took a photo, all of which were entered into a competition (results below). Some bagged more than others. Rob Hall and David Boon did the most riding, visiting over 40 way points each, so well done to them. Coming closely behind were Alan Wibberley and Michael Leach, both managing over 30 way points, followed by a trio who got to over 20 each – David Carrol, Richard Reading and Dave Toogood.

The most active area was the South Midlands with over 170 recorded visits to their collective way points. South Cotswold’s Barrow Wake was the most popular of these, closely followed by the Cotswold Section’s Aviator pub. The Anglian Area followed closely, along with the other English areas. Wales and Scotland had fewer visits, but that reflected the fact that their way points were much more dispersed, and cross border touring was not encouraged at the start of the event by the different governments. Riders visited the breadth of locations selected by the sections, getting to the seaside, taking in lots of cafés, railway and aviation locations, which figured strongly in the section list and the choice of destination by those doing the riding. Many photos revealed ingenious ways of getting machine and location in the same shot, which sometimes seemed to involve double yellows or footpaths.

Above: Simon Rice got his Dragonfly as close as possible to the Radar Memoria

Some sections put on section rides to the way points but most runs were in twos and threes during the good weather. We received many fantastic photographs, some others made us laugh and yet more resulted in e-mail discussion about the great bikes getting an airing. These ranged from flat tank AJSs and Sunbeams, through some to some nice pre-1939 machines, lots of British twins and a strong showing of European bikes including a good selection of BMWs of varying ages as well as Japanese machines. We also had quite a few members using combinations, which was nice to see. Some members even did multiple visits on different bikes or with different ride companions. As the three months passed enthusiasm continued with a final flourish on the closing Wednesday. Combining the admin with riding themselves the Area Reps were grateful for those lines in the e-mails saying how much the event was been enjoyed, creating a new set of destinations and new routes. Our thanks go to the sections who provided the list of 228 places to go, as without their efforts there would have been no Rally, as well as a special thank you to every rider/member who made the event a success which was enjoyed by everyone. The NWPR handbook will no longer be available for the VMCC website, but anyone wanting a copy please reach out to your local area rep and we will get one to you (electronically). Ride safely, from the Area Reps.